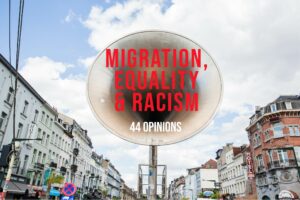 More than 80 VUB academics and co-authors have joined forces for this book and take a stance on migration, equality and racism in 44 thought-provoking and informed opinion pieces.

You can watch the entire book launch event of 21 January 2021 here.

The book is available: download the pdf for free: in English or in Dutch, order the e-book version at BIRMM, or buy the printed version of the book from ASP Editions.

Contributions by members of the research group TOR:

Tolerance towards LGBTQI+ can be developed from within religions
Filip Van Droogenbroeck, Bram Spruyt & Jessy Siongers
Religion seems to be at odds with a tolerant attitude towards LGBTQ: Christians and Muslims are more likely to have prejudices and negative views on homosexuality. That in itself is not surprising. Although all major religious traditions convey a message of universal compassion and tolerance, conservative interpretations of Abrahamic religions (including Christianity and Islam) also represent a heteronormative framework that explicitly forbids homosexuality. Since in Western societies Christian beliefs still have a significant influence on political values and cultural conservatism, and there is an increasing number of (young) Muslims among the population, the key question remains how we can cultivate a tolerant and respectful attitude towards LGBTQ. Is religion irreconcilable with tolerance towards LGBTQ? Do religious people in Europe have to drop their religious convictions to become more tolerant of LGBTQ?

Unity in diversity: the Brussels identity glues everyone together
Petrus te Braak, Laora Mastari, Hélène Lemblé & Gil Keppens
Nowadays, identity is considered to be multilayered. Recent data show that a Brussels identity is the first layer of identity formation for young Brusselians, followed, in second place, by an identification with Belgium and/or the country of origin. Only few people identify with Wallonia and Flanders. We argue that this is related to the demographic composition of Brussels: no ethnic group is dominant, which means that Brusselians belong neither to a minority nor a majority. The Brussels identity, unlike the Belgian, Walloon and Flemish identity, is an open identity that can be interpreted differently by everyone.